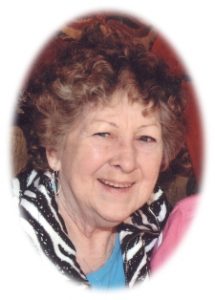 She was born January 2, 1932 in Port Washington to Alvin and Lenore Leider Thome. She attended St. Mary’s Parochial School.

On November 17, 1951, Shirley married Marvin Parlow of Belgium, WI at St. Mary’s Catholic Church in Port Washington. A lifelong resident of Port Washington, Shirley worked over 22 years at Simplicity Mfg. Company in Port Washington in the Service Department and Line Production. She continued to be a homemaker and worked a few years at Grafton Plastics.

Always a smile and a good word for everyone, Shirley cherished every moment with her daughter Melinda. She had been an avid league bowler and loved country music and dancing with her husband, Marv. He preceded her in death on September 4, 2004.

Shirley enjoyed many travels to the western states, especially Branson, MO, with her sister Carol and her husband George Lucas, trips to the shops of Door County with her daughter Michele and granddaughter Melanie, as well as, a bus trip to Nashville with her twin granddaughters Katie and Chrissy in 2012. Holding her only great-grandson Noah, born to Melanie and Steve Balsavich in May, 2017 was a true wonder.

She is preceded in death by her husband Marv, son Mitchell, her sister Carol and sister-in-law Evelyn and her husband Ray Becker.

Family services have been held with interment at St. Mary’s Cemetery in Port Washington.