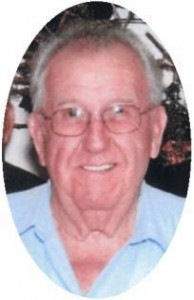 Edmund J. Parchim, “Ed”, age 84, of Granville Road, Cedarburg died peacefully on Wednesday, November 14, 2012 at the Lighthouse of West Bend where he had resided for the past month.

He was born on April 28, 1928 in Milwaukee, son of August P. and Clara Schwartz Parchim.  The family moved to the Newburg area where he attended a one room schoolhouse.  Ed later moved to the Town of Cedarburg.  He served his country in the US Army during the Korean War from 1951-1953.

On September 11, 1954, he married Rosemary Gerlach of West Bend at Holy Angels Catholic Church in West Bend.  Together they started a family.  In 1964 they moved to Granville Road.  Ed was a hard working family man.  A concrete mason and brick layer by trade.  He started with Krause Construction and Tews Concrete for many years.  He also worked with many construction companies through the Cement Masons Local Union, retired in 1985.  He drove truck for Liesener Soils of Jackson for almost ten years.

He will be remembered as a fun grandpa, a ‘jack of all trades’, able to tear down and rebuild almost anything.  This trait he certainly has passed down to his children and grandchildren.  He is also a gamer for his generation, excelling in BINGO, Sheepshead and the slots.  With great pride he was a member to the Rose-Harms American Legion Post 355 of Grafton and Cedarburg/Grafton Veterans of Foreign Wars Post 10171.

He is survived by his wife Rosemary, his children Sue (the late George) Pujanauski of the Town of Saukville, Patty (Rich) Vey of Grafton, Kenny (Brenda) Parchim of Cedarburg, Nancy (Owen) Cherry of Eagle River, Terry (Diana) Parchim of Sheboygan, Randy Parchim of Waldo and Dennis Parchim of Cedarburg.  He is further survived by 11 grandchildren, 4 great-grandchildren, a sister Delores (the late Dave) Mueller of West Bend, a brother August �Augie� (Bernice) Parchim of Little Kohler, two brothers-in-law Ralph (the late Delores) Rosbeck of West Bend and Herbie (the late Evelyn) Strupp of West Bend, nieces, nephews, other relatives and friends.  He is preceded in death by two sisters Frances and Leona, a brother John and granddaughter Sara Pujanauski.