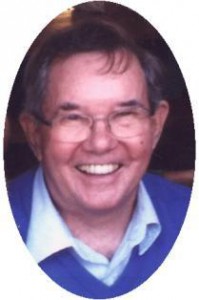 Richard J. “Dick” Kapp, age 82, died Friday, November 2, 2012 at Cedar Lake Community Campus in West Bend where he had resided for the past few months.

Dick was born on September 7, 1930 in Plymouth, Wisconsin, son of John and Irna Federwish (Wapp) Kapp.  On May 1, 1954, he married Jeannette M. Nytes of the Town of Lima in Sheboygan County at St. George Catholic Church in Six Corners, also in Sheboygan County.  He took a job with Wisconsin Electric as a Lineman and moved to Germantown where they started their family.  After 15 years they moved to Port Washington. Dick continued with WE Energies for over 34 years, retiring in 1987.

When he lived in Germantown, Dick joined their local Lions Club.  When he moved to Port Washington, Dick felt a need for a Lions Club in his new home. In 1971, Dick and few others chartered the Port Washington Lions Club.  He would become its club president, covering most committees, such as Eye Bank Chairman and later District Governor of 27-A2 in 1973.  Dick loved winter sports, mainly skiing.  The Lions Club brought new opportunity.  B.O.L.D. (Blind Outdoor Leisure Development) through Lions Clubs International provides activities to the blind and handicap individuals, mainly sports.  Dick and others shared of themselves. Dick spent a lot of time at Little Switzerland Ski Hill.  Using his ingenuity and talents Dick worked on the ski hill maintaining the electrical systems.  He and a few others took BOLD skiers to the hills in the winter.  Later they branched out to other sports.  He became Southeastern Wisconsin BOLD program director, chairman of the United States Association for Blind Athletes Winter Sports (USABA) technical committee, USABA representative of the US Olympic Committee for Winter Sports for the handicapped, Head Coach of the US Blind Ski Team at the Disabled Olympics in 1980 and Head Coach of the US Blind Ski Team for the World Games for the Disabled in Switzerland in 1982.  In 2001, Lion Dick was named as a Melvin Jones Fellow with Lions Club International.

After he retired, Dick and Jeannette moved to Vail, CO for 18 years. A few years ago they returned to Plymouth, WI, most recently back to Port Washington in 2011. Dick’s love of skiing carried over to his children and grandchildren. He enjoyed himself and liked a good time.