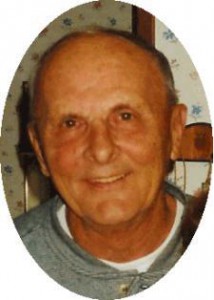 He was born December 11, 1930 to Frederick and Eleanore Altman Nuedling in Milwaukee, Wisconsin.  He worked as a Core maker for Motor Casting from 1947 – 1951 and then worked t Badger Meter in Milwaukee (where he met his wife) until 1955.    He served in the US Army from 1953 to 1955 and when he returned home worked worked for Evinrude Motors until 1960.  After his marriage he moved to Port Washington to work as a loader and distributor on the docks for Murphy Oil from 1960-1981 and later for Moore Oil until 1993. In 1998 he began driving for STS Handicap Services and in October of  2002  he drove for Johnson Taxi Service until November of this year.  He also painted with his son Rick of R & M Painting.  This past November he celebrated his 50th Anniversary.  He was an usher at St. Peter’s and a member of the Van  Ells-Schanen American Legion, Post # 82, Port Washington.