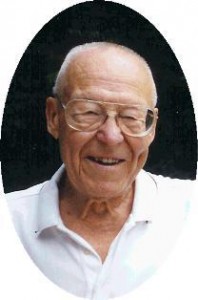 He was born January 8, 1921 to George T. and Mary Mueller Norman in Grafton, WI and moved to Port Washington as a young boy.  He worked at Ewig Bros fisheries and the former Kwik Mix, Port Washington before the war.  When he returned, he married Marion Ewig of Port Washington, WI on April 24, 1946 at St. Mary’s Church in Port Washington.

He joined his father & Walter Gantner in 1950 at Gantner-Norman Insuance Agency in Port Washington which was started in late 1920’s. He took over the business in 1961 and in 1984 sold it to his son Bob.  Jerry continued to work until his retirement at the age of 80 in June, 2001.  He was a member of  the Van Ells-Schanen American Legion Post 82, Loyal Order of Moose Saukville Lodge 1043, former member of Port Washington Rotary for many years and a charter member of the Port Washington Auxilliary Police from the 1964 Tornado.  He was a truck driver for the former Railway Express Company, Port Washington and hearse driver for the Poole Funeral Home for over 30 yrs.  Jerry enjoyed bowling, fastpitch softball and hardball and especially playing cards including bridge, sheepshead and pinochle.