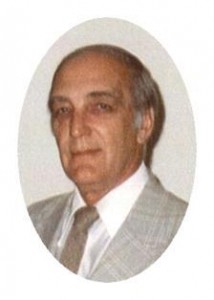 He was born on August 25, 1926 in Port Washington, WI; son of Oscar and Gladys Barber Galles.  He was a graduate of Port Washington High School, active in sports throughout his schooling.  During the summer months he worked on Lake Michigan coal boats.

He was called to serve his country from August, 1944 to June, 1946 in the United States Navy, achieving the rank of Boatswains Mate Third Class.  He served on the USS Bunker Hill aircraft carrier “catching planes” which suffered many casualties from a Japanese attack during the war.

He, with others, was instrumental in establishing the city’s little league baseball program through the park and recreation department.  Through Wisconsin Electric he had been a member of the International Association of Operating Engineers Local 317, as well as the Van Ells-Schanen American Legion Post 82 and the Ozaukee Memorial Post 5373 Veterans of Foreign Wars.  Throughout his life he enjoyed the simple things in life-family and home.  Time spent duck hunting and playing golf were treasured.  His grandchildren and great-grandchildren always had a special place in his heart.