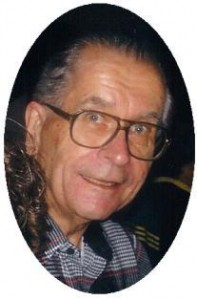 James W. “Jim” Nierode, 78, of Sunset Road, Port Washington died Tuesday July 29, 2010 at Lasata Care center in Cedarburg, WI where he had been a resident for the past few weeks.

He was born on March 21, 1932 to Karl and Elisa Schoessow Nierode in Port Washington, WI.  He graduated from Port Washington High School.  On April 14, 1952 he joined the Army and served mostly in Germany during the Korean War.  He was discharged at the rank of Corporal on March 30, 1954.  He returned to Port Washington and took a job with the former Quik Mix Corporation in Port Washington.  He continued to work there for 42 years, even through a few name changes, and retired from Trak International in May, 1997.  He was a member of the International Association of Machinists and Aerospace Workers Local 1430 for over 50 years.

Jim married Margaret E. “Marge” Fuchs-Polgar of Saukville on March 22, 1975 at St. John’s Lutheran Church in Port Washington.  Over the years he enjoyed fishing and sharing those stories of his adventures.  He was an avid league bowler.  He enjoyed going out to dinner, especially at his favorite spot – Five Pillars Restaurant.

Funeral services will be at 7PM Tuesday, August 3, 2010 at the POOLE FUNERAL HOME, 203 N. Wisconsin Street, Port Washington, WI.  The Reverend Brandon Lemons of Friedens Evangelical Church will officiate.  Visitation will be from 4-7PM Tuesday at the funeral home.  Interment will be in St. Paul’s Lutheran Cemetery in Grafton, WI with military honors by Ozaukee Memorial Post 5373 Veterans of Foreign Wars.  Memorials appreciated.