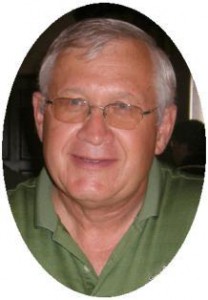 George K. Niedermeyer, “Corky”, 67, passed away Monday, December 24, 2012 with his family at his side from a long battle with cancer at his Town of Saukville home.

He was born on March 23, 1945 in Milwaukee, son of George T. and Nadeane Matt Niedermeyer.  He graduated from Homestead High School in 1964.  Like his father before him, he became a plumber.  George attended Milwaukee Area Technical College (MATC) for his studies and apprenticeship.  He worked as a plumber for 38 years becoming a master plumber before becoming self-employed and then retiring in 2008.

On April 3, 1971, George married Mary Hoeft of Port Washington at St. Mary’s Catholic Church in Port Washington.  Residing in the Town of Saukville since 1979, George and Mary raised their family.

He was an avid hunter, enjoying turkey season and bow deer season.  Over the years, geese and duck were his targets with his canine pals.  He and his family loved the outdoors.  Golfing, camping up north and fishing with the grandkids were always special.  He will be remembered as the ‘Skip-Bo’ playing card king and cheering for those Packers.