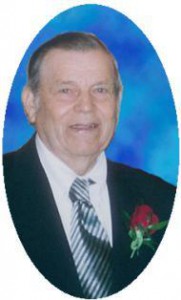 He was born December 12, 1925 in Little Kohler, Wisconsin to John and Ruth Vedder Mueller.  In his youth he worked on the farm.  He served in the United States Army during World War Two as a Private First Class in the 90th Infantry.  He saw action in the Battle of the Bulge and was awarded the Bronze Star.  He married Elfreida “Freida” Mertzeig of Saukville on August 28, 1948.  He began working as a carpenter, building houses.  His wife Freida preceded him in death February 25, 1989.

Reggie was the caretaker for Pioneer Village from 1990 to 2000.  He married Helen Kolbach Klug on May 29, 1993 at Pioneer Village.  The renewed their vows later at Immaculate Conception Catholic Church in Saukville.  He lived on Church Street in Saukville, later in Mequon and Western Avenue in Cedarburg and even at Pioneer Village for a time.  In October he moved to Ellen’s Home on Granite Lane in Port Washington.  He was a member of the Landt-Thiel American Legion Post 470 in Saukville and the Port Washington VFW 7588.  He loved sports, especially baseball, bowling and ping pong and played on the Ozaukee Senior Softball League in Grafton for many years.  He was an avid Brewers and Packer fan.