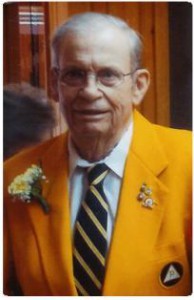 He was one of nine children of Jacob and Amelia Bathke Mueller born on October 7, 1917 in Saukville, Wisconsin.  He had farmed the family farm on Highway I.  On June 23, 1945 he married Ethel Codere of Rudolph, Wisconsin at Immaculate Conception Church in Saukville.  She preceded him in death January 1, 1976.  He worked as a route delivery man for Suburban Beverages in Mequon for 31 years, retiring in 1980.

Jake joined the Loyal Order of The Moose #1043 in 1951 and was a very active member while the Lodge was in Port Washington.  He held all degrees in the Lodge including it’s highest, the degree of Pilgrim.  He was a life member and will be remembered for selling raffle tickets at the bar.   He was also a member of the Catholic Knights.  He was an avid Milwaukee Brewers fan and a proud supporter of the Saukville Saints baseball and the Saukville Softball Association.