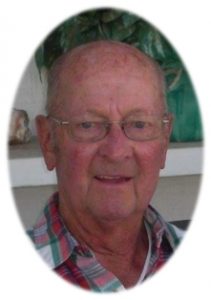 In 1963, Jim founded his business, J. Miller Electric in Port Washington. He was a member of the National Electrical Contractors Association (NECA). Although he retired in the early 1990’s he frequently stopped by his shop at Miller Electric to support his son Paul, who carries on his father’s legacy. He was a member of the Port Washington Rotary Club and enjoyed helping the club with the electrical needs for their annual Fish Day stand. For many years, Jim enjoyed meeting his lifelong friends for coffee at Harry’s Restaurant in Port Washington. The group later met for their daily coffee at McDonald’s in Port Washington where they reminisced about their lives. Jim was an accomplished woodworker and proudly made clocks for all of his children. He volunteered much of his time as a monitor in the woodworking shop at the Sun City, Arizona retirement center. He loved his large blended family and being with his many friends.

Jim was preceded in death by his parents, his first wife Rita, his stepson Jerome Linden, Jr. and stepson-in-law Jim Kartheiser.

Visitation will be held on Friday, December 30th, from 3 to 6pm at Poole funeral home in Port Washington. Pastoral Associate Deb Hamm will preside funeral services at 6pm, also at the funeral home.