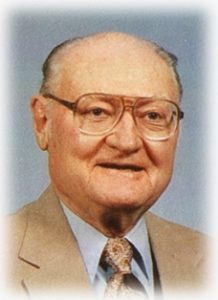 He was born September 13, 1922 in Sioux Falls, South Dakota to Floyd and Margaret Shaffer Miller. He graduated from Lyons High School in Sioux Falls in 1940. During World War Two he served in the U.S. Navy from 1942 to 1946, serving in both the Atlantic and Pacific Theaters.

After the war, he returned to school and earned degrees from Augustana College in Sioux Falls, South Dakota, the University of Minnesota and Columbia University in New York City. He taught school at the secondary level in Minnesota, New York and Wisconsin. He taught at Farnsworth Middle School in Sheboygan where he met Lucille E. Hummel and married her on December 13, 1958. He retired from the Farnsworth faculty in 1982 after 27 years. Lucille preceded him in death August 13, 1982.

In his retirement he was devoted to various writing and volunteer endeavors and enjoyed painting and flowers. He wrote books on baseball, The Sioux Falls Canaries Cross Bats in League Play, the dynamics of reading and school systems, The Vurfield Episode. He volunteered at his church and would visit patients at the former St. Alphonsus Hospital and local assisted living homes to brighten their day with flowers.

He is survived by his sister Floy (the late Jerry) Carter of Seattle, Washington and sisters-in-law Pearl (the late Burdette) Miller and Shirley (the Late Harold) Miller, both of Sioux Falls, South Dakota. Further survived by dear friends Carrie Witthuhn of Florida, Dave Enright of Thiensville, Wisconsin, Jim Reed and Mary Downing, both of Port Washington, Wisconsin, nieces, nephews, other relatives and friends.

He is preceded in death by his parents, two brothers Burdette and Harold Miller and brother-in-law Jerry Carter.

A special thank you to the staff of Ellen’s Home for their wonderful care and to the residents for their warmth and friendship shared with Dwight over the years.