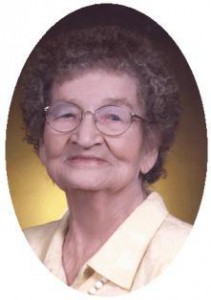 Grace E. Melichar, 86, of Willow Road in the Town of Port Washington, died Thursday, January 5, 2012 surrounded by her family at her residence.

She was born October 10, 1925 in Plainview, Minnesota to Rudolph and Clara Carpenter Miller.  Her father was a carpenter and moved the family to South Lakeshore Road in Grafton for work where  she attended Grafton area schools.  She married Benjamin C. Melichar of the Town of Port Washington on May 27, 1946.  In 1951 they moved to the family farm on Willow Road.  They were members of Grand Avenue United Methodist Church in Port Washington and the American Milk Producers, Inc.  Benjamin preceded her in death March 31, 1982.

Grace was  lovingly referred to as the herdsman of the family, house and farm.  She was friendly to everyone and always helpful to those in need.  After her husband died she enjoyed traveling with family and friends by car and train.  She also enjoyed quilting and donated many of her creations to numerous causes.  She took great pleasure and pride in caring for her children, grandchildren and great grandchildren.

Sincere Thanks to Nancy and staff at  Home Instead in home care and also Carmen, Nicole and staff of Odyssey Hospice, West Allis for your kind service to our family.