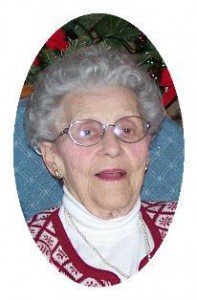 She was born March 26, 1922 in Grafton, Wisconsin to John and Ann Schreiner Dickmann.  She married Frederick H. Fedder of Port Washington, Wisconsin on June 26, 1943 at St. Joseph’s Church in Grafton, Wisconsin.  They moved to Milwaukee and raised a family.   Later they moved to the lakefront in Port Washington and Grafton before settling in their Garfield Avenue home in 1956. She worked at a cookie factory while in Milwaukee and later as a yarnwinder at the Grafton Woolen Mill.  Above all she was a proud homemaker.  Her husband Frederick preceded her in death August 2, 1980.

Harriet was a member of the St. Mary’s Christian women and will be remembered for her cooking and baking skills.  She enjoyed latch hooking, embroidery, country music and spending time with her grandchildren and great grandchildren.