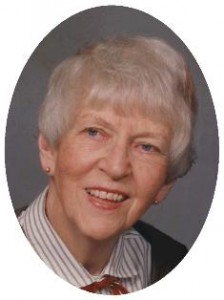 She was the only child ofHans and Ida Wafferwurth Clausen, born on September 9, 1914 in Milwaukee, Wisconsin.  Raised in Milwaukee she graduated from Washington High School.  As a young woman she worked as a clerk for the former Gimbels store in Milwaukee.  Later she worked in the office of Krause Milling Company in Milwaukee until they moved their operations to Iowa.  She married Frederick P. “Fred” Marquardt on December 9, 1968 at First Congregational Church in Port Washington.  Together they resided on Holden Street.  They moved to the Harbor Campus in Port Washington in the early 2000’s.   Gladys enjoyed sewing, cooking and spending time with her husband.  She was also very fond of cats, especially her “Mouse”.  Her husband Fred preceded her in death December 30, 2004.

She is survived by dear friends Jim (Carol) Jones of Port Washington and their children Alicia and Erica Jones.