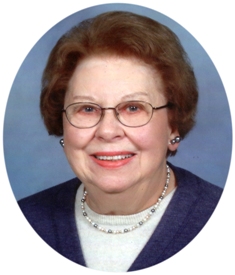 Margaret J. Papin Lampert, age 89, died Wednesday, July 22, 2015 at the Harbor Campus in Port Washington where she had resided for the past year.

A resident of North Stanford Street for many years, Margaret was born in Bonifas, MI on June 14, 1926, daughter of Kathryn Bonifas Nepper and Albert Joseph Papin.

In the early 1950’s, Margaret taught at the Gogebic Community College in Ironwood, MI. She later moved to Milwaukee where she was a children’s wear buyer for the Boston Store for 10 years. She taught at Longfellow School in Milwaukee for a few years before coming to Port Washington in 1964 to teach at St. Mary’s Parochial School. After four years, Margaret moved over to Lincoln Elementary School in Port Washington where she retired from in 1988.

While in Port Washington, Margaret met and married Robert M. Lampert of Port Washington at St. Ambrose Catholic Church in Ironwood, MI. He preceded her in death on July 9, 1998.

Margaret was always very active. In her retirement she volunteered as a reading tutor at Lincoln School until 1997, as a library aide at the WJ Niederkorn Library for 10 years and in the offices of the Port Washington Senior Center for over ten years.

Her Mass of Christian Burial will be celebrated at 11:30AM Monday, July 27, 2015 at St. Peter of Alcantara Catholic Church, 1802 N Wisconsin Street, Port Washington. Visitation 9-11:15AM Monday AT CHURCH with a 9AM rosary. A luncheon will be served after the Mass. Entombment will take place at St. Mary’s Cemetery in Port Washington.