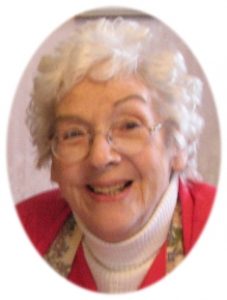 Hazel May Kolocek (nee Rountree) passed away peacefully in the early morning hours on May 2, 2016. She was surrounded by family as she left this earth to join Raymond, her husband of 71 years, who died in January of 2015. Hazel was surrounded by family in the days and hours preceding her death, and lovingly cared for by her daughter Victoria, who served as primary caregiver to both Hazel and Ray for over 10 years.

She is survived by her six children; Angela (Woodrow Hicks) of Elgin, IL, Victoria of Port Washington, Elaine (Joseph Weber) of Sturgeon Bay, John (Terri) of Oostburg, James (Linda) of Port Washington, and Ann (Terry Dibert) of Beaver Dam, her niece Christine (Alan Rosling) of South Woodford, England, eight grandchildren and seven great-grandchildren, along with nephews and their family back in England.

Hazel was born May 24, 1925 in Bethel Green, England. She lived a grand childhood which included visits to her family’s caravan by the seaside, horseback riding in the country, and of course afternoon tea with her family and frequent guests. By the age of 13 years of age, WWII began and her life significantly changed. In 1941 Hazel graduated from St. Barnabus School in Woodford, she intended to make nursing her career and trained at Woodford Jubilee Hospital and the Forest Hospital, Buckhurst Hill. It was while working at St. Mary’s Hospital in Colchester that she met Raymond, a Staff Sergeant in the U.S. Army Air Corp. He appeared at her nursing residence to deliver a message, when Hazel opened the door she saw the love of her life. They were married in 1944 at St. Thomas Church in Woodford Green, England. After the ending of WWII, Ray continued his military career, engaged to work for a division of the FBI in Frankfurt, Germany.

In 1947, Ray, Hazel, and their young daughter Angela came to the states to reside briefly in Virginia, MN before relocating to Memphis TN where Ray graduated from The Southern School of Optometry. Shortly after graduation, they decided to make Port Washington their home for over 55 years, raising a family of six children. Hazel never let go of her English heritage, always welcoming friends to her Victorian home with cup of tea and some biscuits. She enjoyed lifelong relationships with friends she had made over the years, and shall be long remembered for her elegant entertaining, charming English accent and warm personality.

A memorial service was held on May 16 2016 at St. Mary’s Catholic Church, followed by Internment at St. Mary’s Cemetery. Memorial donations can be made to Possibility Playground in Port Washington or Shriner’s Hospital, in Chicago.