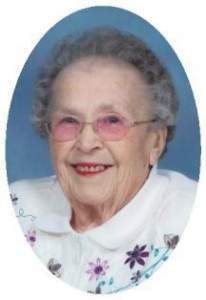 Doris A. Kolbach, 85, formerly of N. Stanford Street, Port Washington died Saturday, February 28, 2009 at the Harbor Club, Port Washington where she had been a resident the past three years.

Doris was a homemaker who was very involved with family and community.  She worked with her sister Anna Ruth at her drapery and upholstery business.  She was involved with the Catholic Order of Foresters serving as their secretary for many years and a member of the St. Peter of Alcantara Church Alter Guild.  In later years she enjoyed working on crossword puzzles and reading mystery novels.

Her Mass of Christian Burial will be celebrated at 6:30PM Tues. March 3 at St. Peter of Alcantara Catholic Church, 1800 N. Wisconsin St., Port Washington.  Reverend Patrick Wendt will be the celebrant.  Visitation will take place from 3:30-6:30PM Tuesday AT CHURCH with a 3:30PM rosary.  Entombment will be in St. Mary’s Cemetery, Port Washington. Memorials to the church appreciated.