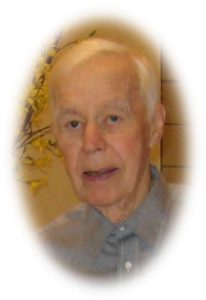 Ervin T. Karrels, age 95, of South Garfield Avenue, Port Washington, WI passed on to eternal life surrounded by his loving family on July 13, 2017 at Lawlis Family Hospice Center in Mequon. He was born in Chicago, IL on October 4, 1921 to Jacob and Marie (nee Freiman) Karrels. He married Elaine M. Watry of Holy Cross on October 1, 1955 at St. Nicholas Catholic Church in Dacada. She preceded him in death on April 23, 2015.

While raising his family in Port Washington, Erv worked at Simplicity Manufacturing Co. for 34 years from 1953-1987. Ervin was a wonderful, caring husband, father, grandfather and great-grandfather. His family was most important in his life and he helped them any way he could.

He loved having his grandchildren and great-grandchildren playing at the house or just sitting on his lap. Erv’s passion was gardening and he would spend hours in his “organic garden”. He enjoyed being outside putzing in his yard, he was a collector of many things and was proud of his ability to repair whatever needed fixing.

Memorials may be made to St. John XXIII Catholic Parish or to the family for sharing with special local charities.

The family would like to thank the staff of Comfort Keepers organization and the Milwaukee VA Home Health Department for their compassion, friendship and skilled assistance, as well as Horizon Hospice for making Ervin’s final days comfortable and peaceful.