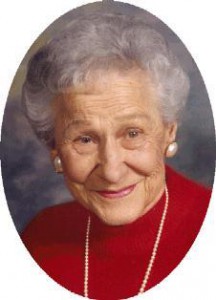 She was born April 2, 1915 in West Allis, Wisconsin to John and Margaret Varga Hering.  In October of 1939 she married Steve Hayden of Milwaukee.  He preceded her in death in November, 1972.

Helen worked for the former House of Bidwell Orthopedics doing clerical work and custom fittings until she was 72.  She also volunteered at Columbia St. Mary’s Hospital in Milwaukee.  She was a member Sacred Heart Catholic Church in Milwaukee and the Sacred Heart Altar Society for many years.  She enjoyed being out and trying new restaurants.  She travelled the US and Europe extensively, visiting family and friends.

She is survived by her daughter Diane (Michael) Pike of Port Washington, grandchildren Christopher (Alicia) Pike of Grafton and Kelly (Kent Nelson) Pike of Beloit, WI.  Further survived by great grandchildren Aaron and Celsey Pike, other relatives and friends.  Two brothers, John and James Hering, precede her in death.