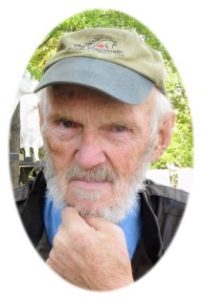 William Richard Bradford Hastings 87, of Glendale, Wisconsin passed away peacefully under Horizon Hospice & Home Care in his daughter & son-in-laws home in Belgium, Wisconsin on Saturday, December 10, 2016. He was born in Wauwatosa, Wisconsin to William H. and Marie R. Hastings on July 18, 1929. William was a devoted single father raising two girls 21 months apart from infancy. He was a beloved father, son and brother. He was a Korean War Veteran. He was also a talented artist and musician. Many happy memories are when he was playing the piano crooning away with his dog howling by his side. He would play anywhere he could find a piano and often played at Seven Oaks Nursing and Rehabilitation Facility in Glendale where his Mother was a resident.

His favorite saying in life was “I give a shit” a sentiment passed on by his Father. It may sound bad…but it’s really good advice today in a world where we are consumed by uncertainty and craziness…sometimes we just need to sit back, reevaluate and just let things fall into place without too much fuss.

William is survived by his daughters Susan (Tom Petersen) of Belgium and Christine Hastings of Portland, Oregon. Further survived by his sister, Rosemary Hastings of Belgium, along with his grandsons, Dana (Pamela Duda) Petersen and Brede. Predeceased by his Father, Mother and by his Sister Lorraine who died at only 3 months of age.

Per William’s written request…a private service for immediate family will be held at a later date. Please make any memorials to Horizon Home Care & Hospice www.horizonhch.org to further their compassionate services to all who are in need.