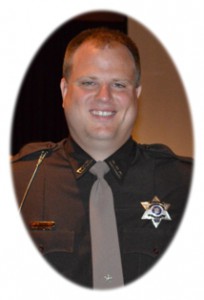 He was born November 1, 1985 in Port Washington, Wisconsin to Dave and Lois Winnemuller Hartwig.  The youngest of three boys he developed a sense of humor early and was the family cut-up, easily sharing a smile and a laugh.  He graduated from Port Washington High School in 2004 and later received a degree in Criminal Justice from the University of  Wisconsin-Milwaukee in 2010.

Adam married the love of his life, Janel on a gorgeous winter day in 2012.  They met in high school when he was 15 years old and soon they became high school sweethearts.  Their real adventure began when Waylen arrived in July of 2015. Adam had a special bond with Waylen that no one will ever be able to replace. Waylen is a true reminder of Adam’s spunky personality.

On August 26, 2013 Adam landed his dream job.  He began working with the Ozaukee County Sheriff’s Office, starting in the jail and was quickly promoted to patrol.  He was a kind-hearted and a dedicated law enforcement officer who truly considered his fellow Deputies his second family.

Adam was very caring and willing to help anyone he could.  He was always working on something around the house or helping a friend and always put others first.  He had a lot of love to give and gave so much to his family and friends.

He is survived by his wife Janel and son Waylen; his parents Dave (Lois) Hartwig of Port Washington; his brothers Jason (Jill) Hartwig of Appleton, Wisconsin and Brian (Andrea) Hartwig of Cedarburg and his nieces and nephews  Jackson, Adelynn, Mabel and one on the way.  Further survived by his in-laws Mark (Brenda) Slicker of the town of Port Washington and Mike (Dawn) Ninneman; sister-in-law Sarah (Chris) Slicker of Greendale, Wisconsin; his brothers and sisters in his law enforcement family at Ozaukee County Sheriff’s Office, aunts, uncles, cousins, other relatives and many friends.  He is preceded in death by his grandparents Jerome and Arline Hartwig and Fran and Bernice Winnemuller.

Memorials to the family for his son Waylen are appreciated.

Days will pass and turn into years.  But you will always be remembered in our laughs and in our tears.  Please share a favorite memory or picture of Adam for Janel and Waylen to cherish at memoriesofdaddy2016@gmail.com