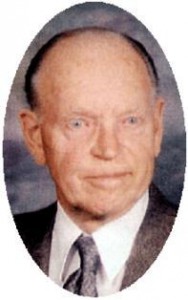 He was born August 15, 1915 in Port Washington to Fred and Louise Moessner Gunther.  Raised in Port Washington, he graduated from Port Washington High School in 1933.  As a young man he worked on the construction of the Electric Power Plant and the Great Lake Dredging of the the Breakwater in Port Washington.  He entered the Army Air Corps. in 1942 and served as a flight instructor throughout the war and in the Air Force Reserves until his discharge as a Captain in 1955.

Arno attended vocational school and the University of Wisconsin in Milwaukee for drafting.  He became a design draftsman in the Engineering Department at Simplicity Manufacturing in Port Washington, retiring after 28 years in 1979.  He was a lifelong member of Friedens Evangelical Church and the Van Ells – Schanen American Legion Post 82 in Port Washington.  He was an avid walker and subscribed to a life of healthy living and nutrition long before it was acceptable.  He will be remembered as a meticulous and very peaceful man.

He is survived by cousins Edna Guenther and Helene Kruke, both of Port Washington, other cousins, relatives and friends.  He is preceded in death by his parents and brother, Frederick.