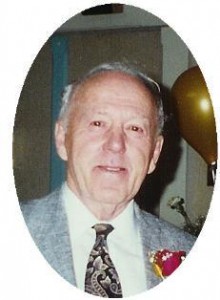 He was born July 18, 1922 in Port Washington, Wisconsin to Nicholas and Edna Salzer Brabender.  He served in the US Army during World War Two from 1942 to 1946.  He married his high school sweetheart, Eileen Bell of Saukville on June 24, 1944 in Joplin, Missouri.  Upon his return from the war, Harry began working for the Port Washington Engineering Department until 1967.  He worked for the Ozaukee County Highway Department from 1967 until he retired in 1977.  He was also self – employed as a registered Land surveyor.  He was also a member of the City of Port Washington Planning Commision for many years.

Harry was a member of the Port Senior Center and a life member of the Belgium Memorial Post 5373, Veterans of Foreign Wars.  He enjoyed playing bridge, pinochle and sheepshead.  He liked woodworking and made windmills, flower carts and lawn furniture.  He also enjoyed boating and making model cars.

He is survived by his wife Eileen, and daughters Carol (Mel) Birkholz of Port Washington and Karen (James) Lavora of Belgium.  Further survived by grandchildren Shelly (Rob) Hartmann, Kyle and Katie Cobbledick, great grandchildren Nathan and Nicholas Hartmann, other relatives and friends.  Preceded in death by a brother, Regis and grandson, Shaun Cobbledick.