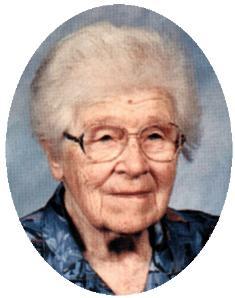 Edna H. Guenther, 100 years, of North Holden Street, Port Washington, died peacefully Friday, September 21, 2012 at Ellen’s Home in Port Washington where she has resided for the past two years.

Edna grew up in and around the daily workings of the Brickyard.  She graduated from Port Washington High School in 1930.  She began her career as a secretary for PW School District Superintendant Dunwiddie until 1937.  She then moved over to Modern Equipment Mfg Company of Port Washington.  They now had a staff of two.  Edna was responsible for accounting, clerical, and estimates amongst others.  She retired in 1977.  At that time, there were twenty in the office staff.

Edna remained on North Holden Street for many years.  She could be seen walking her buddy Fritz and observing the latest high school traffic.  Edna and her sisters Anna and Hilda lived together in the family homestead for most of their lives and they each reached a fruitful age.  They cared for their parents and each other, with Edna remaining.  She was proud of her family, Port Washington and their heritage.

She was active in her church, Friedens Ev. Lutheran.  She served on numerous church councils and building committees and was a charter member of the Evening Ladies “Guild” Fellowship, along with being a Sunday School Teacher, Choir Member and a member of the Afternoon Guild.  Through Friedens, she volunteered at Cedar Lake Campus in West Bend, using her seamstress and clerking abilities, helping with laundry and assisting the Alzheimer’s residents.  She even was a member of their Auxillary Board.  She will be remembered for her caring, support and fiestiness.

Edna is survived by her nieces Susan (Tim) Rafferty of Brighton, MI, Jean (Ron Winter) Gilliland of Ossineke, MI, Ann Horton of Naples, FL; her nephew Walter (Joanne) Guenther of Gualala, CA, further survived by 7 grandnieces and nephews and 9 great-grandnieces and nephews, other relatives and many friends.  She is preceded in death by her sisters Adeliade Gilliland, Anna and Hilda Guenther and brothers Felix and Walter.  She is also preceded by her canine pal Fritz.