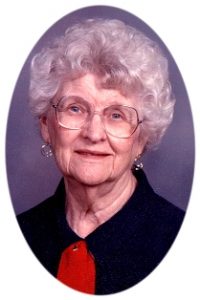 She was born on January 30, 1917 in Mellen, Wisconsin; daughter of Anton and Katherine Berres Schaeffer.  Rose grew up on the family farm in St. Michaels, near Kewaskum.

On November 17, 1936, Rose married Edwin C. Gross of Port Washington at St. Mary’s Catholic Church in Port Washington.  For a time they farmed near Waubeka.  They moved to Northwoods Road in Port Washington and then to Parknoll Lane for many years.  Edwin preceded her in death on January 21, 2000.  Rose lived at the Maple Crest Apartments for quite a few years after that.

Her husband was a commercial fisherman on Lake Michigan with the Bossler Brothers while Rose worked at Phillip Sales in Belgium and the Kenro Corporation in Fredonia.    Rose also worked a few years at the Badger Outerwear in Port Washington.  Rose took care of her family and enjoyed sewing when the children were young.  She and her husband proudly worked their gardens and volunteered at the Pebble House for many years.