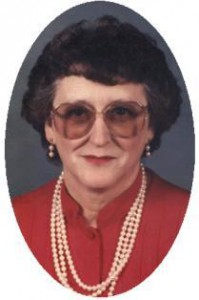 Janis G. Gosse, age 83, formerly of Westport Drive, Port Washington died peacefully on Monday, December 30, 2013 at Lasata Care Center in Cedarburg where she had resided the past few years.

She was born on February 4, 1930, daughter of Lymann and Katherine Tork Russell in Portage, WI.  Her family moved to Port Washington in 1941.  On July 19, 1952, Janis married Jerome E. Gosse of Sheboygan at First Congregational Church in Port Washington.  For many years, they raised their family on Madison Street in Port Washington.

Janis worked at the former Wisconsin Chair Factory, Badger Raincoat and Bolens Manufacturing Company.  Later on she worked as a health aide.  Upon retirement, Janis and Jerry lived on Westport Drive in Port Washington.  He preceded her in death on July 21, 2011.

She is survived by her son and daughter Jeff Gosse and Julie Gosse, both of Port Washington and her son Joel (Karen) Gosse of Madison, WI.  She is further survived by her three grandchildren Katy, Eric and Amanda, 6 great-grandchildren, nieces, nephews, other relatives and friends.  She is preceded in death by her husband Jerry, three sisters Kathlene, Beth  (Don) Conway and Frances Kester and two brothers Gaylord and Norman (Anita) Russell.