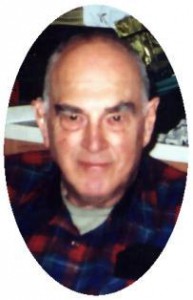 He was born in Port Washington, August 23, 1930, son of Earl and Clarinda Penkwitz Godersky.  He attended St. Mary’s Catholic School and Port Washington High School.  He enlisted in the US Navy; serving on the USS Currituck from 1948 to 1952 during the Korean War.  Upon his return, John married Patricia Kerber of Milwaukee on February 27, 1954 in Waukegan, IL.  Together they raised their family on Chestnut Street in Port Washington.

For over 32 years he worked at American Motors/Chrysler in Milwaukee, mostly as a crane operator.  In 1999, he and Pat moved to Fond du Lac.  John enjoyed doing crossword puzzles, fishing, hunting, taping videos and reading, especially Louis L’Amour books.  He spent his time gardening, making all kinds of Christmas ornaments, barbequing and traveling in the family camper.  He loved to spend quality time with his children, grandchildren and great-grandchildren.

His Mass of Christian Burial will be celebrated at 1pm Saturday, March 2, 2013 at St. Mary Catholic Church, 430 N. Johnson St., Port Washington.  Reverend Thomas Lijewski will be the celebrant.  Visitation will be held Saturday from 10:30AM-12:30PM at the POOLE FUNERAL HOME/Crematory, 203 N. Wisconsin St., Port Washington.  Interment will take place in the parish cemetery.  Memorials to the charity of choice appreciated.