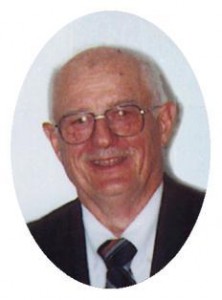 He was born on May 31, 1928 to Thomas and Olive Gremminger Dieringer in the town of Auburn, near Campbellsport.  He and his family lived in Fond du Lac briefly, later moving to farm in Belgium in 1948.  On June 9, 1951, he married Jean M. Barnes of Newburg at St. John’s Lutheran Church in Fredonia.  Together they raised their family in the Town of Port Washington.  Jean preceded him in death on June 29, 2007.

Addy was a truck driver for many years.  He drove for the former Olsen Transportation and CW Transport of Grafton for over 27 years.  He later drove for his brother Tom Dieringer/NFO retiring in 1992.  He enjoyed tending his yard, tinkering in the garage while listening to German polka music.  He could fix almost anything.

Funeral services will be held Wednesday, March 6, 2013 at 6PM at the POOLE FUNERAL HOME, 203 N. Wisconsin St., Port Washington.  Family will receive friends from 3-6PM Wednesday before the service.  Interment will be at Union Cemetery in Port Washington.   Memorials to the charity of your choice are appreciated.