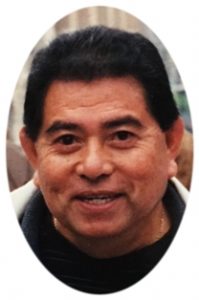 He was born on March 30, 1941 in Matnog, Sorsogon, Philippines; son of Felimon and Concepcion Galan Garay.

Gus earned a bachelor’s degree and a juris doctor from University of Santo Thomas, Philippines, from which he graduated in 1968 with the support of Fema, his wife. After graduation, he joined the Filipino army as a captain and attorney in the Judge Advocate Group (JAG).

On July 20, 1969, Gus married Fema So at the military chapel in Quezon city, Philippines.

Fema and Gus immigrated to the United States in the spring and summer of 1970, respectively, just in time for the birth of their first son, Gus Jr.

Gus and Fema made their life in Port Washington, with a love for the community that drove them to a long life together of servant leadership. They were partners in all the small, ordinary things of daily life and in the big things that they did together to impact the community. Gus fished daily in the summer with his children and wife; and when the kids left for college, he and Fema became the best of fishing and hunting partners. He was a longstanding member of the National Rifle Association and the Saukville Gun Club.

Their partnership in spirit and thought led them to contribute and influence others to improve the Saukville library, to create the aquatic center at Thomas Jefferson, to make numerous repairs to the beautiful St. Mary’s church, and to build the water fountain at Rotary Park, among other philanthropic acts in Ozaukee County. The community recognized their outstanding contributions to Port Washington by bestowing the honor of Grand Marshals upon them in the 1991 Fish Day Parade.

As a business leader, real estate developer, and member of the Rotary Club and Knights of Columbus, Gus was a master of bringing professionals in the community together to do good deeds. The city of Port Washington had long wanted a marina to establish the port as a more valued tourist destination for charter and recreational fishing, a sport Gus loved. The development of the planned marina stalled due to lack of funding.

After speaking with Fema, Gus spearheaded the movement to complete it. At her urging, he put his money down, banking on the boost to the local economy that a marina would bring. He invested in the community that had made him successful.

His happy camaraderie with others created a groundswell of business people contributing the needed funds. His passionate way of speaking made others want what he wanted for the betterment of the community. He was gifted with a voice that spurred people to action.

In the late 80’s, Gus committed himself to another important cause, the preservation of the Sauk Creek preserve in Port Washington. Through his friendships, he built bonds across academia, the Ojibwa tribe, citizens of Port, and environmentalists to maintain the land for the Port Washington community. He loved the land and what it had meant for his children and the children of Port Washington.

He was a man of many people and many talents, and two beloved countries, the U.S. and the Philippines. His very best of friends were judges, doctors, and expert fishermen and hunters with the wisdom of the ages. He was the family’s very own Renaissance man, with the ability to express the depth of his heart and soul in the many paintings and sketches of the places he loved, including the Port Washington lighthouse and pier, St. Mary’s church, and his beloved city of Matnog and Tikling Island.

He is survived by his wife Fema So; his children Joseph R. Garay M.D. of the Philippines; Augusto “Gus” (Kathleen) Garay, Jr., J.D. of Decatur, GA; Rufina C. (Christopher Thee) Garay, J.D. of Sheboygan and the late Augustita So “Tita” Garay. He is further survived by grandchildren Dylan Jacob, Gabriella Tita, Elizabeth Fema and Daniel Andreas; nieces, nephews, and many other relatives and friends.

His Mass of Christian Burial will be celebrated at 12:30PM Saturday, December 10, 2016 at St. John XXIII Parish – St. Mary’s Roman Catholic Church, 430 N. Johnson Street, Port Washington. Reverend Patrick Wendt will be the celebrant. Visitation 11AM-12:30PM Saturday AT CHURCH prior to the Mass.

The family kindly requests that no flowers or plants be sent.

POOLE FUNERAL HOME/Crematory, Port Washington is assisting the family. Information and condolences available at www.poolefh.com or 262/284-4431.