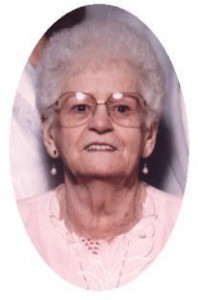 Pearl E. Frievalt, 94, formerly of Chiswell Street in Saukville, died November 12, 2011 at Plymouth Care Center in Plymouth, Wisconsin where she had been a resident the past six years.

She was born April 21, 1917 in Coleman, Wisconsin to Emile and Rose LaMarshe Sincere.  She married David P. Frievalt of Coleman on February 15, 1936 at St. John the Baptist Catholic Church in Coleman.  They farmed in Coleman for a while before moving to Two Rivers, Wisconsin and then Milwaukee, Wisconsin.  She worked as a waitress for many years while raising her children.  In 1979 she moved to Saukville, Wisconsin.  Her husband David preceded her in death January 26, 1985.  Pearl’s family and faith were prominent in her life.  She enjoyed praying the rosary and was a member of Immaculate Conception Church in Saukville.