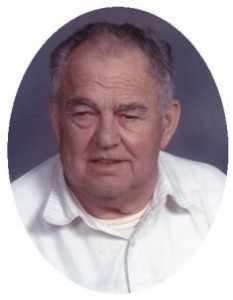 Jerome R.”Jerry” Doll, formerly of County Trunk KK, Town of Port Washington died Thursday, November 10, 2011 at the Harbor Cove in Port Washington where he had resided the past few years.

He was born on October 2, 1927, son of Joseph S. and Marie Auftermauer Doll in Hartford, WI.  On November 6, 1948 he married Dolores Schommer of Dacada at St. Nicholas Catholic Church in Dacada.  She preceded him in death on April 13, 1996.

Jerry drove trucks.  He drove for Barry Trucking of Milwaukee, Stodyk Trucking of Port Washington and Kohler Mfg. Company of Kohler for many years until his retirement in 1988. He was a strong independent man who enjoyed Northern Wisconsin.  For many years he would spend his time hunting, fishing or snowmobiling.  He enjoyed snowmobiling so much he co-founded the Belgium SnoRunners Club.  He was even their first trailmaster.  As his eyesight failed he still strived to remain independent.  He later moved to the Harbor Village in Port Washington.

He is survived by his three sons, Thomas Doll of Grafton, Jeffrey Doll of Port Washington and Mark (Jane) Doll of the Town of Port Washington; eleven grandchildren, his sister Marlene (Bill) Condon of Hartford, two brothers Norman (Dorothy) Doll of Slinger and Arthur (Arlene) Doll of West Bend, a brother-in-law Andrew Schnitzler of Theresa, nieces, nephews, other relatives and friends.  He is preceded in death by his wife Dolores, three sons Jerome Jr. , James and Randall Doll, a sister Marion Schnitzler and two brothers Willard and Joseph Doll.

A Mass of Christian Burial will be celebrated at 6PM November 16, 2011 at St. Mary’s Catholic Church, 430 N. Johnson St., Port Washington.  Reverend Patrick Wendt will be the celebrant.  Family will receive friends from 3-5:30PM Wed. at the funeral home. Interment will be in the parish cemetery.  Memorials to the Alzheimer’s Assoc. 620 S. 76th St. #160, Milwaukee, WI 53214 are appreciated.