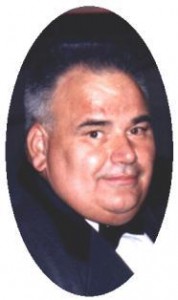 William L. “Bill” Fleischmann, age 75, of W. Norport Drive, Port Washington, passed away peacefully Monday, January 28, 2013 at Heritage Nursing and Rehabilitation Center in Port Washington where he had resided the past few years.

He was born on January 3, 1938 in Milwaukee, son of William C. and Jeanette Mae Schlieve Fleischmann.  He grew up in Sherman Center, Kewauskum and later Richfield.  He attended Boys Tech in Milwaukee, excelling in football and wrestling.  From 1956 to 1958, Bill served in the Army at Fort Bragg.

On June 29, 1958, he married Mattie Lee Smith of Laurinburg, NC in her hometown.  They moved to Port Washington in 1960 to raise their family.  For over 44 years, Bill worked for Power Products/Tecumseh in Grafton.  He was a machine operator and later a customer service representative.  He retired in 2000.

Bill enjoyed fishing.  He appreciated the Great Lakes and muskies, attending many tournaments.  For many years, Bill operated Fleischmann’s Custom Rod and Reel Repair.  He built fishing rods to his customer’s requests and often tried them out personally to make sure they were just right.  He enjoyed trap shooting and sponsored many teams through the Ozaukee Gun Club.  He was a Life member of the Port Washington Lions Club, volunteering his time and his talents to many worthy causes along with Fish Day and Fish Derby.

Bill was a proud dad, supporting his children in their activities.  He was a Boy Scout/Weblo/Explorer leader with his sons; often taking them camping and fishing up north.  He was proud of their wrestling exploits.

Funeral services will be 11AM Friday, February 1, 2013 at the POOLE FUNERAL HOME, 203 N. Wisconsin Street, Port Washington. Visitation will be from 9-11AM Friday prior to service. Interment will be at Union Cemetery, Port Washington with military honors by the US Army and VFW Ozaukee Memorial Post 5373.  Memorials in Bill’s name to Port Washington Lions Club, PO Box 351, Port Washington, WI 53074 appreciated.