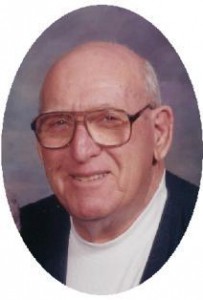 He was born on December 22, 1927 in Milwaukee, Wisconsin to Elmer and Viola Carrington Fidler.  He grew up in West Allis, later moving to Sturgeon Bay later in his military career.  He married Violet Bitters of Lena, Wisconsin on August 16, 1952 in Oconto, Wisconsin.

He began his military career on July 24, 1946 and served throughout Japan, Korea, Greece, Kansas and Nebraska.  He retired on February 29, 1968 with the rank of Staff Sergeant in the Army.  After his military career he worked for the Wisconsin State Patrol-Truck Enforcement in southeastern Wisconsin over 20 years and retired in 1989.  During this time he was living in Port Washington on Stanford Street.

He is survived by his wife Violet, a son Geno (Nancy) Fidler of Port Washington and their children Nicole, Andy and Jenni, a sister Mary Lou Gruendemann of Waukesha, sisters-in-law �Dickie� Bitters, Dolores Poradeck and Lulane Henderson, all of Oconto Falls and Leatrice (Billy) Townsend of Sturgeon Bay, nieces, nephews, other relatives and friends.  He is preceded in death by his brother Eugene Fidler.

Funeral services will be 6PM Friday, August 17, 2007 at First Congregation Church, 131 N. Webster St., Port Washington.  The Reverend Jeff Suddendorf will be the officiant.  Interment will be in the Union Cemetery, Port Washington.  Visitation will be from 4-6PM Friday at church.  Memorials to the church are appreciated.