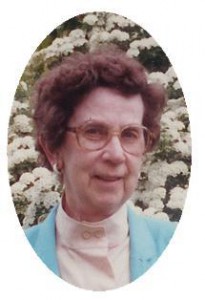 She was born in the Town of Belgium to John B. and Katherine Freiman Majerus on April 20, 1916.  She was a graduate of the Sheboygan Falls Teachers College and taught in a one room school house for almost twelve years at the old school on Middle Road, north of Port Washington and at Ulao School in Grafton.  She married Edward J. Dickmann of Port Washington on September 6, 1947 at St. Mary’s Church in Port Washington.  After her marriage she had to leave teaching to raise her family, only single teachers could teach at that time.   Her husband preceded her in death on December 1, 1975.

Sylvia worked at the St. Vincent DePaul Store on North Franklin Street and later at the current location south of Port Washington for 20 years from 1960 to 1980.  She was a member of the St. Mary’s Parish and Christian Women and a former Poll worker.  She enjoyed reading and will be remembered for her German Potato Salad.

The family would like to thank Dr. Scot Wilfong and the staff at Columbia St. Mary’s Ozaukee Hospital for their compassionate care, the employees and management at JLG Industries for their support, relatives, friends and neighbors for their acts of kindness and a very special thank you to the staff and volunteers at Lakefield Adult Day Care Center for their extraordinary and gentle care given to mom during her last years.