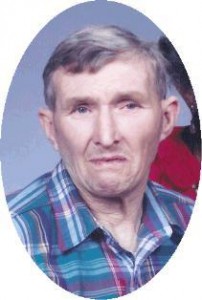 He was born August 18, 1927 to Francis “Frank” Federmeyer and Anna E. Heinz in the Town of Port Washington.  He was one of 12 children.  He farmed on the family homestead on County KW (Middle Road) in the Town of Port Washington.  In 1994 he moved to Hearthside Healthcare Center in Brown Deer, Wisconsin.  This last year he had resided at Menomonee Falls Health Care Center.  He loved all animals, especially “his little puppy, Mitzi” a sheltie and enjoyed spending time outside in the fresh air.  Joseph was a kind and helpful man to others and was very close to his sister Marie.

Reverend Allan Sommer will celebrate Mass of Christian Burial at Noon on Saturday, May 1, 2004 at St. Mary’s Church, 430 N Johnson Street, Port Washington.  Interment parish cemetery.  Visitation after 11 am Saturday AT CHURCH with an 11 am rosary service.