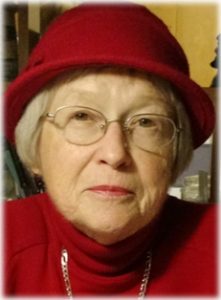 She was born January 8, 1937 in West Allis, WI to John and Mary Lisiecki Borowski. She married Jack A. Eckert on July 13, 1954 in Dubuque, IA. She dutifully served her country as a Coast Guard wife, moving the family wherever Jack was stationed. With her faith as an anchor, she knew every new place would bring a faith community she could find refuge and support in.

The family settled in Port Washington after Jack retired as a Lieutenant Commander from the Coast Guard. Jack was a former Port Washington Alderman and served on the Ozaukee County Board and Joana worked for the Ozaukee County Sheriff’s Office as a Baliff, retiring after 23 years in 2002. She also helped the Census Bureau 3 times. Always one to keep busy, she worked in the office at the former Ben Franklin Crafts in Grafton for 5 years and was always an AVON Lady. She helped Seniors with their taxes at the Port Washington Library and Senior Center, was a day care mother and was always active within her church. Jack preceded her in death March 24, 2005.

She is preceded in death by her husband Jack, her son Randy, grandson Chris and a sister Theresa (John) Pomaranski.