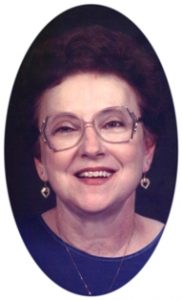 She was born September 2, 1936 in Ironwood, Michigan to Edward and Stella Sokoloski Burnette. She married Kenneth Chaney of Crandon, Wisconsin on December 19, 1957. They moved to Milwaukee, Wisconsin and started their family. In 1963 the family moved to Grafton, Wisconsin and in 1972 settled into their new home on Parkview Lane in Port Washington. Her husband Kenneth preceded her in death April 25, 2014.

Geraldine was a proud homemaker, delighting the appetites of her family with her cooking and baking skills. She also worked for 26 years assembling small engines at Power Products in Grafton, Wisconsin. She was a member of St. Peter of Alcantara Catholic Church (now St. John XXII Catholic Parish) and was a social butterfly, easily making lifelong friends.

As a member of the Port Washington Senior Center she enjoyed Packer Party Fridays and the many activities they held. She was a Wisconsin sports fan and was never far from a Packer or Brewer game broadcast. She enjoyed crocheting, cards – especially sheepshead, a good rummage sale and was an avid reader.