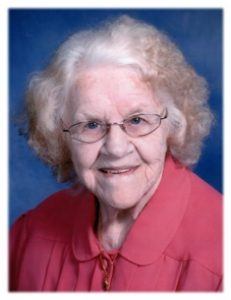 Esther F. Buttke, age 94, formerly of Mequon, WI passed away Thursday, October 25, 2018 at Ellen’s Home in Port Washington where she has resided the past few years.

She was born on February 13, 1924 in Milwaukee, WI; daughter of Edward E. and Clara H. Mueller Dorow. Esther graduated from Milwaukee Girls Technical High School. Two years later, on June 15, 1946 she married Donald C. Buttke at St. Martini Lutheran Church in Milwaukee. After a few years they moved to Mequon.

Esther was a proud homemaker raising her three children. She would later cook at Homestead High School, Oriole Elementary School and Donges Bay Elementary School until her retirement in 1989. She had been active in her church in the Altar Guild, Ladies Guild, Nursery and Vacation Bible School. She would later move to Cedarburg with her daughter and more recently to Port Washington.

Memorials to the church appreciated.