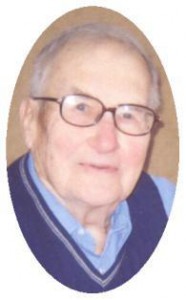 Wilfred J. Burmesch, “Wiff”, age 92,  passed away peacefully on May 27, 2012 at the Harbor Club in Port Washington where he has resided for almost a year.

He was born in the Town of Belgium on January 8, 1920, son of Frank X. and Katherine Watry Burmesch. He grew up on the family’s dairy farm. Wilfred served in the US Army during World War Two from February, 1942 through his discharge on January 18, 1946. He served 19 months in the South Pacific, achieving the rank of corporal as a radio operator.

He was united in marriage to Julianna V. Karrels on May 29, 1946. He was a molder at JE Gilson Foundry for 22 years until “the fire” in 1962. He then worked for Simplicity Manufacturing Company in Port Washington for 16 years, retiring in 1982.

Wilfred was a kind and caring gentleman who loved his family and made everyone close to him feel special. He was a passionate woodworker, building children’s furniture during his retired years. He also enjoyed gardening, fishing and playing cards. He was an avid Packer and Brewer fan. He was a faithful member of St. Mary’s Catholic Church in Port Washington, active in the Men’s Club and Usher during his earlier years.

His Mass of Christian Burial will be celebrated at 6PM Friday, June 1, 2012 at St. Mary Catholic church, 430 N Johnson Street, Port Washington. Reverend Thomas Lijewski will be the celebrant. Visitation will be from 2-6PM Friday AT CHURCH with at 2PM rosary. Entombment will be at St. Mary’s Cemetery in Port Washington with military rites by the US Army and Ozaukee Memorial Post VFW 5373.

In lieu of flowers or other expressions of sympathy, a memorial fund has been established through St. Mary Catholic Church in Port Washington.

The family would like to thank the staff of the Harbor Club, Home Instead and Vitas Hospice for their tender loving care and concern for Wilfred.