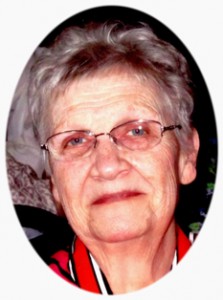 Mary Joan E. Bruecher, “Sis”, age 79, of Lasata Care Center in Cedarburg, formerly of East Woodruff Street, Port Washington passed away Wednesday evening, August 12, 2015 at Lasata where she resided with her husband, Larry for the past three years.

Mary Jo was born on January 5, 1936 in Milwaukee, WI; daughter of Frank and Leona Schiller Lorge. As a young girl, her family moved to Port Washington where she attended St. Mary’s School and graduated from Port Washington High School.

Over the years she raised her family and kept a happy home.  If you asked Mary Jo, she would say her most important occupation was “friend” and her job was always to provide a listening ear.

For over fifteen years she worked in the Deli of the Sentry Store in Port Washington.  On August 22, 1980, Mary Jo and Lawrence E. “Larry” Bruecher married at St. Mary’s Church in Port Washington.  She always provided smiles and laughter and was the heart of their combined families.

The family would also like to express their thanks for the kind and loving care that Mary Jo received as a resident at Lasata Care Center.  Especially the staff on One West who cared for her like she was family.