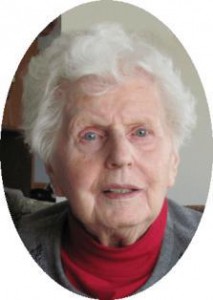 Sophia A. Bostwick, 93, of West Michigan Street, Port Washington passed away peacefully on Saturday, June 16, 2012 at Aurora Medical Center in Grafton.  She inspired many through her love of family, nature and living a simple, fulfilling life.  She enjoyed sharing with others the bounties of her gardens and delicious home cooking.  She loved laughing and social times with neighbors and friends.

Sophie was born on April 12, 1919 in Millston, WI to Frank and Mary Jerse Novak.  She was raised on a farm along with six sisters and three brothers.  Later the family farmed in Grafton.  In her youth she had waitressed at the former Mayer Hotel in Port Washington.  On November 11, 1944, she married Howard B. Bostwick of Port Washington at St. Marys Catholic Church in Port Washington.  They raised seven children instilling in each the values of education, hard work, care of the environment and empathy for others.  Sophie was a proud and loving wife, mother and grandmother.  She was preceded in death by her husband Howard on March 22, 2003 and her son Edward.

The family thanks the staff of the Port Washington Harbor Club and Aurora Medical Center Grafton for their loving kindness and quality care.  The family also thanks Aurora Hospice for their support.