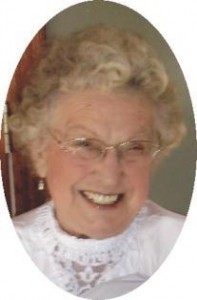 She was born on April 21, 1920 in Belgium, WI; daughter of Mary Walter and Henry Bittner.  She grew up on the family farm.  As a young girl she worked at the former Mayer Hotel in Port Washington and waitressed at Smith Bros. Restaurant.

On May 8, 1943, she married Killian Bode of Port Washington at St. Mary’s Catholic Church in Port Washington.  Together they raised their family.  Taking great pride in her family and home, Millie was a great cook and enjoyed quilting.  Grandma and Great-grandma were her most popular titles.  She was an inspector for the Orion Company in Grafton, retiring in 1994 after over twenty years.  She was a faithful woman, prayed the rosary, was active with St. Mary’s Christian Women and funeral fellowships for many years.  She also volunteered with the annual parish dinner.  She and Killian were very social.  They enjoyed snowmobiling with family and friends and later bus gambling junkets.  She will be remembered for her helpful giving spirit and friendly smile.  Killian preceded her in death on February 22, 2011.

She is survived by her children, Mary Margaret (David) Decker of the Town of Belgium, Vernon (Donna) Bode of Fredonia and Killian (Judy) Bode, Jr. of Atlanta, GA; 7 grandchildren, 13 great-grandchildren, two sisters Marie Weyker of Grafton and Theresa (Earl) Oelhafen of Sheboygan, two sisters-in-law Ginny Bittner of Belgium and Valarie Bittner of Port Washington, nieces, nephews, other relatives and friends.  She is preceded in death by her husband Killian, sisters Estella Eischen and Helen Deppiesse and brothers Wilbert, Donald, Ervin and LeRoy Bittner.

Mass of Christian Burial will be celebrated at 7:30PM Tuesday, January 22, 2013 at St. Mary Catholic church, 430 N. Johnson Street, Port Washington.  Reverend Patrick Wendt and Reverend James Ernster will con-celebrate.  Visitation will take place from 4-7:15PM Tuesday AT CHURCH with a 4PM rosary lead by the members of St. Mary’s Christian Women.  Burial will be at St. Mary’s Cemetery in Lake Church, town of Belgium.  Memorials to the Alzheimer’s Association appreciated.