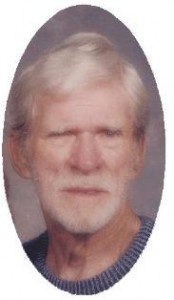 Earl N. Bates died on July 16, 2004 at Columbia St. Mary’s Hospital, with his family at his bedside.  He was born at home in Round Grove, Illinois on October 14, 1914, the only child of Margaret and Frederick Bates.  He graduated from Morrison Illinois High School and Chillicothe Business College.  As a young man he loved ballroom dancing and playing baseball and managed the Round Grove team.

He met Vi Teunas at a baseball game and they were married on June 21, 1940.  They lived in Milwaukee foe many years.  Earl was a self taught carpenter and built four homes in addition to helping many friends and relatives with their building projects.  During their 62 years of marriage they had two children of their own and opened their home and hearts to nine foster children.  His beloved wife Vi preceded him in death on June 10, 2003.

Earl retired in 1974 as a train dispatcher for the Chicago & Northwestern Railway, after 40 years of service.  His father was the station agent in Round Grove and taught Earl how to operate the telegrapher’s key when he was only 10 years old.

Vi and Earl enjoyed an active Retirement and started Neenah Creek Crafters out of their home in Oxford, Wisconsin.  Known for the fine, hand card wooden Santa’s they were the featured artists at many arts and crafts fairs and at the Pabst Mansion Christmas Show in Milwaukee.  They were also involved with their square dancing club and Peoples Church in Montello, Wisconsin.