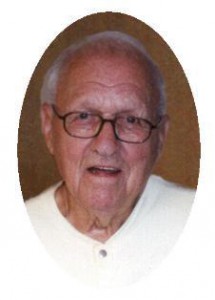 Alvin G. Bares, “Alvie”, 93, Port Washington, formerly of North Harrison Street, Port Washington died peacefully Thursday, September 8, 2011, just a few days shy of his 94th birthday, at the Harbor Club where he has resided for the past two years.
He was born on September 21, 1917 in Port Washington, son of Lawrence and Anna Dornbach Bares. He attended St. Mary’s Catholic School and graduated from Port Washington High School.
On April 25, 1942, he married Catherine Plein, born in Detroit but raised in Port Washington, at St. Mary’s Catholic Church in Port Washington. On December 1, 1942, Alvie entered the US Army during World War Two. He achieved the rank of corporal and was discharged on October 15, 1943. In 1946, he started working for the City of Port Washington Water Department. He was sent by the City to Illinois to study water management and became their water superintendent. The new filtration plant opened in 1949 with Alvie at the helm. Over the years, he was responsible for the City swimming pool filtration equipment, board of public works and common council meetings and all repairs to water mains and fire plugs. He retired from the City of Port Washington in 1982.
On July 8, 1946 he joined the Port Washington Fire Department. Over the years he became the Captain of the City’s Ambulance Service and Ozaukee County Rescue Boat as well.
In his spare time he enjoyed bowling regularly and was inducted into the Ozaukee County Bowlers Hall of Fame in 1984. He was a lifetime member of the American Waterworks Association and a 50+ year member of the Van-Ells Schanen American Legion Post 82 and Knights of Columbus Ozaukee Council 2035.
He will be remembered for his quiet demeanor but forthright and a straight-shooter. Residents and staff of the Harbor Club found him quite social and enjoyable to be with. He appreciated his independence, enjoyed going for a drive and taking the time to chat.
His wife Catherine preceded him is death on July 10, 2006. He is survived by his brother Gerald (Bernice) Bares of Black River Falls, nieces, nephews, the residents and staff of the Harbor Club, other relatives and friends. He is also preceded by his sister Adeline (John) Deppisch and his brother Reverend Elmer Bares.
His Mass of Christian Burial will be celebrated at 4PM Tuesday, September 13, 2011 at St. Mary’s Catholic Church, 430 N. Johnson St., Port Washington. The Reverend Thomas Lijewski will be the celebrant. Visitation will be from 2-4PM Tuesday AT CHURCH. Interment will take place at St. Mary’s Cemetery with military honors. Memorials to the Port Washington Food Pantry or St. Mary’s Church are appreciated.