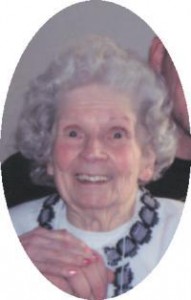 She was born November 16, 1912 in Milwaukee, Wisconsin to Leander and Martha Strutz Johnson.  She grew up in Milwaukee and lived there for many years.  She married Daniel J. Mertens of Manitowoc in 1932.  He preceded her in death in October, 1951.  In June of 1953 she married Ardin J. Arveson of Wautoma.  He preceded her in death August 20, 1995.  She was a bookkeeper for many years at the former Wieman’s Variety Store in Milwaukee.

Memorial Services will be held at a later date.