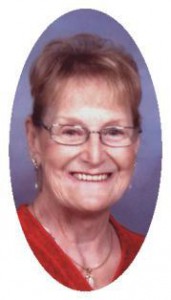 She was born on April 15, 1939 in Potter, Arkansas, daughter of William Burl and Nellie Lee McCravans Bledsoe. At the age of 10, her family moved to Adell, Wisconsin. She attended local schools. She married Eugene J. “Gene” Arendt of the Town of Port Washington in Paducah, Texas on April 9, 1955. Together they made their home in the Town of Port Washington and raised their family.

Ruby will be remembered as a kind, giving and loving person. She was selfless with her time and put others before herself. Her family was very important to her. She was proud of her family history and charted genealogy with extended family across the country and Ireland. For over thirty years, “Flowers by Ruby” could be seen at many weddings throughout the local area. She had been a volunteer driver for the elderly through Ozaukee County Social Services and knitted hats and mittens with the former St. Alphonsus Hospital in Port Washington.

A Funeral Mass of Christian Burial will be celebrated at 6PM Wed. September 19, 2012 at St. Peter of Alcantara Catholic Church, 1802 N. Wisconsin St., Port Washington. Reverend Patrick Wendt will be the celebrant. Visitation will take place from 4-6PM Wed. AT CHURCH with a 4PM Rosary. Interment will take place in Union Cemetery in Port Washington. Memorials of donor choice are appreciated.