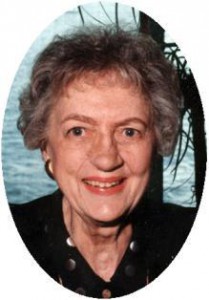 She was born February 26, 1923 the only child of Archibald and Theresa Bay Altendorf in Milwaukee, Wisconsin.  Raised in Port Washington she attended St. Mary’s School until 10th grade and graduated from Port Washington High School.  In 1944 she earned a degree in Business from Mount Mary College.  She lived many years in Glendale until she moved back to Port Washington and the Harbor Campus in 2009.

Muriel was the office manager for the Old Port Brewery until it was sold to a Utah beer distributor and later closed.  She then began working for a Milwaukee CPA firm and commuted by Greyhound Bus.  Later she took a job with Deising Pontiac in Milwaukee for 17 years until the city’s riots closed it down.  Her career as an accountant and business manager took her to Blackmore Oldsmobile, Balistreri Oldsmobile and finally Flaherty Chevrolet and Oldsmobile in Port Washington until her retirement in the late 1980’s.  She was a member of Our Lady of Good Hope Catholic Church in Milwaukee and enjoyed traveling.

She is survived by many cousins.  Her parents and long time friend and companion John Danielson precede her in death.