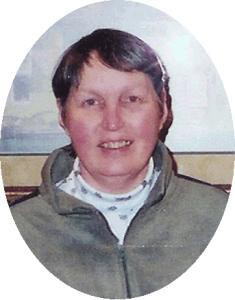 Linda S. Winnemuller, 52, of 333 Judge Drive, Saukville, died peacefully Thursday, May 22, 2003 at her residence with family at her side after a courageous battle with cancer.

Linda had worked for 21 years at Kohl’s Food Store, West Bend and the last 10 years in the meat department of Piggly Wiggly, Mequon.  She had a knack helping people at the meat counter, sharing recipes and making people smile.  She was a volunteer for Advocates of Ozaukee County and enjoyed playing canasta, the sport of golf and collecting spoons.  Over the years she shared many wonderful years with her husband and their families.

Mass of Christian Burial will be celebrated at  7PM Tuesday, May 27 at Immaculate Conception Catholic Church, 145 Church St., Saukville. The Reverend Karl Acker, pastor will be the celebrant.  Interment will be in the parish cemetery.  Visitation Tues. 4-6:45PM AT CHURCH.  Memorials to American Cancer Society appreciated.