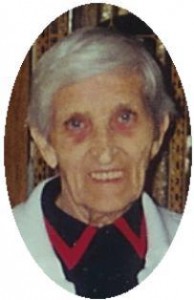 She was born October 30, 1908 in Budapest, Hungary.  As a young girl she came to American and was raised by Elizabeth Faik and her family.  On August 29, 1928 she married Emil Weslow of Milwaukee, Wisconsin in Waukegan, Illinois.  For most of their married life, they lived in Port Washington, Wisconsin.  They were blessed with three sons; Dinnis, Emil, Jr. and George and a daughter, Yvonne, who died in infancy.  Emil preceded Anna in death December 4, 1982.

Anna was an active lady and enjoyed sewing.  She worked at the former Mayer Hotel and Wilson through the years.  After Emil’s death she moved to Oak Court and lived there for 29 years.  She was a member of Portview Christian Center in Port Washington and loved her many friends there.

She is survived by her son George (Carleen) Weslow of Little Suamico, Wisconsin and daughter-in-law Kathy Weslow of Napa, California.  Anna was a proud grandmother to Melinda (Rich), Nathan, Anna, Ben, Darlene and Wendy.  Further survived by 4 great grandchildren, other relatives and friends.  Preceded in death by her husband Emil, daughter Yvonne, sons Emil, Jr. and Dennis, sister Betty Bolyard and a brother Adam Faik.